About The Galapagos Islands

History of the Galapagos Islands

The history of the Galapagos Islands is fascinating; the islands were formed 5 million years ago as a result of tectonic activity on the seabed. For centuries, these relatively young islands were enveloped in an aura of mystery and were considered ghost islands. They were discovered by accident on March 10, 1535 by father Tomas de Berlanga. Because of a lack of official records, expeditions made to the islands remained unknown for another 300 years, during this time the islands were only used as a hiding place and supply area for pirates and corsairs. On January 20, 1832, an expedition sent by Juan Jose Flores (President of Ecuador at the time) departed to the Galapagos, and the Republic of Ecuador annexed the islands to its territory on February 12, 1832.

On September 15, 1835 the British expedition, HMS Beagle led by Captain Robert Fitzroy arrived in Galapagos to map asylum sites, the young naturalist Charles Darwin was part of the expedition on the islands and he conducted a scientific study of geology and biology before continuing your expedition around the world.

UNESCO declared the Galapagos Islands as a World Natural Heritage in 1979.

The archipelago is located in the Pacific Ocean, 972 km from the coast of Ecuador. It is made up of 13 large islands, 6 medium-sized islands and 215 islets. The islands cover a total area of 4897 square miles (7880 square kilometers)The Galapagos Islands are a dynamic region with volcanic activity, which means that now and then, new lava fields are formed, which end up forming new islands that erode and expand.The largest island of the archipelago is Isabela, which constitutes almost half of its surface; the highest point of all the islands is the Wolf volcano, which has an altitude of 5600 feet (1707 m).

The protected marine reserve covers an area of ​​about 133,000 square kilometers (51,000 square miles). The oceans of the reserve make up a unique ecosystem, rich in biodiversity. This is largely due to a phenomenon known as the Humboldt Current. These currents are very important for life and its most visible effect is the abundant marine and terrestrial life found there.  The marine reserve of the Galapagos Islands is the second largest marine reserve in the world. 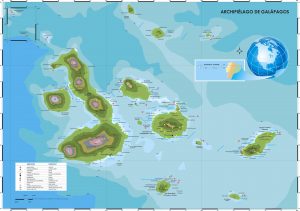 Baltra is a small island located in the center of the archipelago off the coast of Santa Cruz. Baltra is home to one of the two airports that connect Galapagos with continental Ecuador and it is the point of arrival for most travelers to the Galapagos. During World War II Baltra served as a base for the US Air Force. Today the island is an official Ecuadorian military base.

This island is famous for its picturesque landscapes and fascinating rock and lava formations. Bartholomew is home to several endemic species including the Gala plethora of tropical fish.

Darwin Island is one of the best diving sites in the archipelago and thus the world. Here you will find a wide variety of marine species such as the famous whale shark, hammerhead shark, pods of dolphins, some killer whales and colorful reef fish.

The island is located between the Santiago and Santa Cruz islands; the island has restrictions for tourist visits and is reserved for scientific research only. The island was a shooting range during World War II.

Española is located in the southeast corner of the archipelago, its mostly flat, with few hills and endemic vegetation all over. Here you can find; Albatross, marine iguanas and other unique wildlife.

The island is located in the south of the archipelago, it is an island full of legends, and it was a haven for pirates and home to the first inhabitants of the islands. The Devils Crown is hands down the best place for snorkeling in the Galapagos.

Genovesa is a small island located in the northeast of the archipelago, AKA bird island; the island is home to a large number of frigates and countless bird species such as; Nazca boobies, red-footed boobies and swallow tailed gulls. In Darwin Bay, you can enjoy a beautiful beach with coral sand; just off the beach, you will be able to spot frigate, red-footed booby and seagull nesting sites.

Isabela is the largest of all the islands in the archipelago. Isabela was born of fire, from the union of five volcanoes; even though the island has large areas of solidified lava with sparse vegetation, it also has extensive green areas with endemic vegetation including the unique red mangrove. You will also find beautiful beaches to enjoy and relax in the sun, especially in the south of the island.  Puerto Villamil is located southeast of the island.

Marchena Island is not open to the public. Marchena Island had a slight volcanic activity back in the early nineties. However, the island is most famous for the discovery of mummified remains on one of its beaches, which belonged to the first inhabitants of the archipelago.

Mosquera islet is made of reefs of rock and coral, and is only 160 meters wide.  However, it is home to the largest population of sea lions and many shorebirds. You can also spot killer whales feeding on the unfortunate sea ​​lions.

This island is characterized by its arid regions, yet it is home to countless sea lions, blue-footed boobies and frigate birds.

Pinzon is quite small and located west of Santa Cruz. It is a great place to spot batfish, seahorses and red-lipped sharks.

This island was home of the world famous Lonely George tortoise, the last known specimen of the species Chelonoidis abingdonii, one of the many giant tortoise species of the archipelago. Before the 90s, goats were introduced to the island; these goats ended with the vegetation of the island, and made the population of native turtles extinct. The goats were eradicated back in 1990 and the vegetation of the island is in a recovery process. Because of this, there are not visits to this island by land; however, it has excellent diving sites such as Cape Chalmers, Cape Ibbetsoin and Nerus Point.

Rabida is one of the most colorful islands and a great diving site. Here you will find the renowned brown sand beaches and will marvel with the impressive lookout points and breathtaking landscapes. It is a great place for bird watchers, where they will find some of the rarest species of birds on the islands.

On Santa Cruz Island, you will find the largest and most touristic city of the archipelago – Puerto Ayora. The island is a dormant volcano whose last eruption is estimated to have occurred a million years ago. On the island, you can find pristine beaches, hotels, restaurants, grocery stores and can easily book day tours to others nearby islands and visit the Charles Darwin Station.

Santiago Island provides an extraordinary landscape; it is full of beaches, cliffs and pinnacles and is home to hundreds of seabirds. Back in the day, pirates used the island of Santiago as a replenishment area.

The small town of Puerto Baquerizo Moreno is located in San Cristobal Island, which has an airport that connects with mainland Ecuador. Here you will find frigate birds, sea lions, Galápagos tortoises, red-legged gannets, blue-footed boobies, marine iguanas, dolphins and Galapagos seagulls. You will also be able to visit the largest lake in the archipelago «El Junco» lagoon.

Santa Fe is located in the northeast of the archipelago, it has several trails for visitors, one of the trails leads to a picturesque bay, and the others to a panoramic viewpoint on a cliff, and the island has small beaches and a forest of prickly pear cacti.

The island is home to the largest colonies of sea lions and the colorful yellow and red iguanas. The island has steep cliffs formed by growing lava and is now covered by Opuntia cacti.

Wolf is located north of the archipelago, there are no visits by land but it is a fabulous diving site, reserved for experienced divers. Currents can be quite strong and visibility is often limited. Some very impressive wildlife, like the whale shark, hammerhead sharks and dolphins can be spotted here.